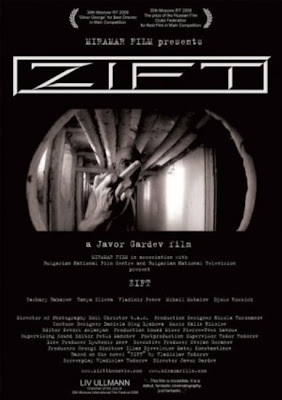 Zift is a spectacular Bulgarian film noir, set during a time of political and social change with a pulp style and somber black-and-white photography. Director Javor Gardev manages to blend the expectation of genre in a way which provides a relevant and entertaining film. Zift is fun and fearless, never taking itself too seriously; a combination which is always a joy to watch. Though many aspects of the film may seem somewhat familiar; the basic plot resembling classic noir D.O.A., Zift always feels original and fresh.

Three characters with insect nicknames pull a heist together shortly before the Bulgarian communist coup in 1944, and the most valuable item from the theft goes missing. Moth (Zahary Baharov) emerges from prison after being convicted for a murder he didn’t commit, and is immediately picked up by the real killer, Slug (Vladimir Penev). As Moth is tortured for information in the remote area of a bath house, he gives somber narration and flashbacks to the audience to explain.

Like all great film noirs, the trouble begins with a woman. and Moth begin a relationship. Soon his gift of a preying mantis to her gives her the nickname Mantis. The fact that Moth describes the female mantis’ killer instincts after copulation is a glaring warning sign. Soon Moth, Mantis and Slug are planning to rob a jeweler, meanwhile after his release Moth attempts to reunite with Mantis before the night is over.