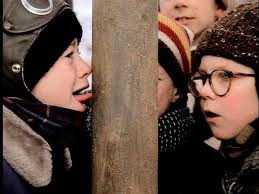 A Christmas Story is a classic Christmas film of sorts, but it doesn’t fit in with most categorizations, and in my opinion is one of the few realist Christmas films. Studios have tried unsuccessfully to duplicate the disastrous realities of holiday seasons, and I suppose National Lampoon’s Christmas Vacation is a close comparison without the nostalgia. The fact that A Christmas Story is told through the eyes of a child makes it feel like childhood, including all of the shameful and embarrassing bits along with the wonderful. There are so many of these realistic moments that A Christmas Story plays like a series of nostalgic and tragically comical moments in a young child’s winter trying to convince his parents that he is old enough to get a Red Ryder 200-shot Carbine Action Air Rifle.

Based on Jean Shepherd’s novel “In God We Trust, All Others Pay Cash,” A Christmas Story is a narrated tale of nine-year-old Ralphie (Peter Billingsley) during Christmastime in 1940s Indiana. Ralphie is an average nine-year-old with the usual troubles and anxieties. He is worried Santa won’t bring him his present of choice and is dedicated to getting the word out in order to increase his chances, but this is just one of Ralphie’s misadventures. He has the trouble of an adorable younger brother that takes the attention away from him and gives him more responsibilities, especially herding the coat-paralyzed young boy to school. Ralphie also has the worries of schoolwork and dealing with the hijinks he and his friends get into, including the famous tongue-on-a-frozen-flagpole sequence.

What makes this film so beloved is the ridiculous and embarrassing characterization of the family, which may be more dead-on than is humorous at times. Ralphie’s gruff father (Darren McGavin) is usually in a bad mood, which changes when he wins a prize lamp that his wife (Melinda Dillon) sorely disapproves of. Ralphie is mostly an observer to his parent’s bizarre behavior, unless he makes a mistake, such as a slipped swear word, which leads to punishment.

All of the material from the two-disc collector’s edition DVD are included on the one Blu-ray disc, which includes a high definition presentation of the film. Along with a commentary track with Billingsley and director/co-writer Bob Clark there is a sampling from the book, read by author Jean Shepard. There is also a 20th Anniversary Documentary, previously released, along with a few featurettes on the iconic leg lamp and the toy gun longed for. There is also an interactive trivia option and a few other fun gadgets and gizmos to fool around with on the Blu-ray.