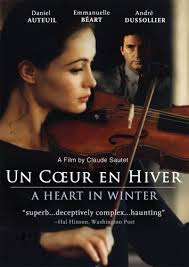 Painful unrequited love is cinematic torture and gold. Television shows love to drag out unrequited love for an entire season, if not longer. Just look at the tension which was allowed to build on The Office (the American version) before Jim and Pam were finally allowed to kiss. The reason that it works so well is because they are finally given the opportunity to kiss which relives the suspense from the shoulders of the audiences tuning in each week. Un Coeur En Hiver, or A Heart in Winter, is intensely successful in the installment of suspense in the audience, which is left dangling there for nearly the entire film without any promise of relief. It takes remarkable direction to pull this off without upsetting an audience from the emotional torment, but Claude Sautet certainly seems capable.

Emmanuelle Beart is absolutely engaging as a miraculously talented concert violinist, Camille. She is smothered by her chaperone and although she has become engaged to a man who repairs violins, Maxime, although she only truly seems interested in opening up to his reserved business partner, Stephane, who is the one with the real talent with violins. Maxime and Stephane work together but have little in common except that they both seem affected by Camille. Maxime’s arrogance and natural charm overshadows Stephane, who seems to watch the world from a distance. Camille is slowly attracted to this reserved man, somehow relating to his solitude in life, which builds inevitable tension between the three of them.

While Maxime seems to have no real skill other than wooing people, Stephane and Camille have extremely rare abilities, and they only seem completely at peace with their surroundings when they are making art; Stephane with his incredibly sensitive violin repairs and Camille in her passionate violin playing. These instruments are the heart of the film and all of the emotion which they keep repressed inevitably comes out through the music in the film. The only difference between the two, who are each attracted to each other, is that Stephane is unwilling to love. For whatever reason, whether it is a bad childhood or refusal to hurt his partner, he rejects Camille’s love, which somehow makes her love him more. It is a desperately painful sight to watch and even the producer admits that it isn’t a box-office friendly film in a segment from a documentary in the special features.

In many ways A Heart in Winter became less of a romantic film for me because it almost seems at moments as though Stephane is purposefully manipulating the people in his life. Because of how little he says it is impossible to know for certain what he is thinking and I kept expecting some sort of a revealing monologue to provide closure which would never come. This feeling of anticipation never satisfied brings the audience into the same position as Camille, an uncomfortable switch to say the least.

The DVD has a newly restored HD transfer of the 1992 film, which was personally supervised by the film’s director of photography. There are also a few special features including an excerpt from a documentary, Claude Sautet ou la magie invisible, which covers a lot of examination of the film in just a short amount of time. There are also three interviews, two of which are from French television. Two of the interviews are with director Claude Sautet and the other is with actor Andre Dussollier.