Youth of the Beast review

The new Criterion Collection release of Seijun Suzuki’s Youth of the Beast is exactly the type of film that has come to be expected from Criterion, and yet the DVD is less flattering than other Criterion releases have been in the past. The transfer still looks as beautiful as always, but there isn’t much else to the actual DVD. Even the menu is somewhat flat and uninspired.

Youth of the Beast is a crime film which may not seem original to new viewers because it has been duplicated countless times since it was released in 1963. It is the story of an ex-cop who takes revenge on every local gang in hopes to find the killer of his old friend. The ex-cop joins two rival gangs, attempting to find information, but also never hesitating to use violence as much as necessary. The film was far ahead of its time, using violence in such creative ways that not much needs to be shown for the audience to get the picture and be shocked. The film begins in violence and ends very fittingly in the same way. 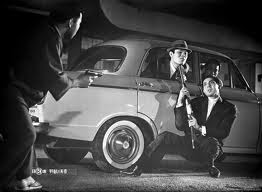 Youth of the Beast is visually stunning, with great use of colors that is so inventive and creative, while at the same time shows horrific violence. It is a great in classic Japanese cinema that belongs on any avid collector’s shelf, even if it is only taken off and watch every so often. Criterion makes a great habit of releasing films that we may not watch all the time, but can appreciate far longer than the films which we enjoy watching more.

The DVD has an amazing restored quality, making the film seem even sharper, and it also boasts a newer and more improved English subtitle translation. There are also a few filmed interviews and the theatrical trailer. None of these features are as solid as one would hope for a film of such high caliber, but the film itself is worth the price.