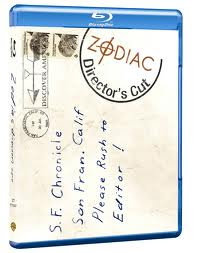 It is somehow surprising to see that Zodiac is among the first of director David Fincher’s films to make its way to Blu-ray. It may be the one film of his least likely to have a cult following the way many of his others seem to, but it has also been one of his finest achievements and most critically acclaimed film. There is a giant flaw in the hugely popular Award season that takes place between January and March, and it specifically affects the films being released in theaters during this time. Regardless of whether it is the Academy or the Hollywood Foreign press, the nominating committees for most of these award shows have very short memories, making the end of the years a popular time for films seeking awards. Zodiac was appropriately set for a Fall 2006 release, perfectly timed for award season, but everything was behind due to delays. Instead Zodiac was released very early this year, set to compete against all of the films still fresh in everyone’s mind while nominating.

Even the DVD release, which is often a recent secondary way of helping encourage nominations, occurred long before the nomination period. Wisely, Zodiac still made an effort, however futile it may have been, releasing the 2-Disc Director’s Cut at the end of 2007, perfectly timed to refresh our memories that it was one of the best films of the year. A perfect example of how much the timing seems to matter coincides with the release of Zodiac on Blu-ray, which is Fincher’s latest film in theaters, The Curious Case of Benjamin Button. Aside from being a crowd pleaser, it was released on Christmas Day. The two films couldn’t be more different, but that simply shows how talented Fincher really is as a director, though he seems to reign most confident in films of violence, as Zodiac is dedicated to.

The reason the film was delayed is not unrelated to how brilliant it is. Director David Fincher has become infamous for his meticulous nature among other things, and Zodiac is his most thoughtful and intelligent film yet. It is also his most meticulous being as it is a period piece and based on actual case files. Fincher was taking longer than the studio would have liked, and this is also all the more reason why the release of a director’s cut would seem significant. Even though I am all for the promotion of the film, the new cut of the film doesn’t seem all that different from the theatrical version. Even still, this two-disc is still welcome, with a commentary from Fincher, who is pretty much non-stop with explanations and details for the entire commentary. He is one of the most engaging directors to listen to, mostly because of how meticulous he is.

The second commentary on the first disc with the film is with actors Jake Gyllenhaal, Robert Downey Jr., Brad Fischer, James Vanderbilt and James Ellroy. Gyllenhaal is essentially the lead character in the film, or at least the one we seem to stay closest to. He is a cartoonist for one of the newspapers contacted by Zodiac, a serial killer who has brutally slain at least two couples. Working at the same paper as Gyllenhaal is a reporter (Robert Downey Jr.) with a nature predisposed to drugs and alcohol. These two men become obsessed with the Zodiac murders and the taunting killer, where on the police side Mark Ruffalo plays a detective with just as strong an obsession.

The Blu-ray is released in two-discs, just like the DVD release of the Director’s Cut, and all of the special features and such are transferred directly over with little change. All of the documentaries are in high definition, but the real treat is Fincher’s meticulous film, both the soundtrack and the remarkable images that look even more incredible on high definition. Certain directors are so careful in their filmmaking process that there are always more details unveiled watching their work in high definition, whereas a weak director often shows flaws the more the audience can see. Fincher is an infamous perfectionist, and is films are art because of it.