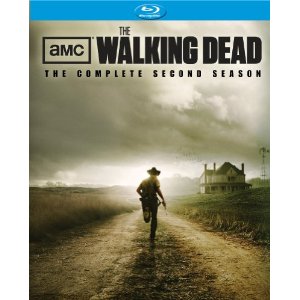 The Walking Dead S.2
With the countless films that continue to drive the zombie film to the forefront of the horror genre, it is not surprising that a zombie television series was finally created. Vampire series are now cliché and predictable, mirrored after Twilight. “The Walking Dead” seems to be similarly drawn to the plot which brought back a new type of zombie film in the genre. Both Zack Snyder and Danny Boyle had their zombies run rather than walk in the Dawn of the Dead remake and 28 Days Later. “The Walking Dead” allows the same, though perhaps with a little less ferocity. This bloody AMC series also begins in the same manner as 28 Days Later; our protagonist awakens from a coma in a hospital to find that the world has completely fallen apart.
County Sheriff Rick Grimes (Andrew Lincoln) awakens from a coma and discovers that his town is abandoned. His wife and child are gone, so he sets out to find them, discovering along the way that there are undead walking and hunting living flesh. He eventually finds other people, and they band a group together for survival. The cities are over-run with zombies, and the only chance is to hide from the mass of undead. The series is spectacularly well done, created by Frank Darabont who also directs select episodes. Darabont is best known for his Steven King adaptations, most remarkably the prison ones (Shawshank Redemption, Green Mile). The last one he made, however, seems closest to the style of “The Walking Dead.” The Mist was a horror film about a group of survivors trapped in a grocery store. “The Walking Dead” is a spectacular series about the difficulties of this type of post-apocalyptic lifestyle as well as the threat of being eaten.
The first season was only six episodes, which seemed like plenty with the high quality of production. Season two more than doubles the amount of episodes, and takes the storyline in all-new directions. First they must leave the city, since they have discovered that there is no help to be found. This journey away is detoured when one of the vehicles breaks down and one of the members of the survivors is shot in a random hunting accident. There is also a missing member of the group and all of the twists and turns left unresolved from the first season.
As well as an increase in episodes, there has also been an increase in the treatment of the series on Blu-ray. The four-disc set includes all of the episodes for season two and 11 featurettes about the production from every gory aspect to actor’s opinions. There are also six webisodes and audio commentaries on five of the episodes from season two. There are also a handful of deleted scenes from select episodes.