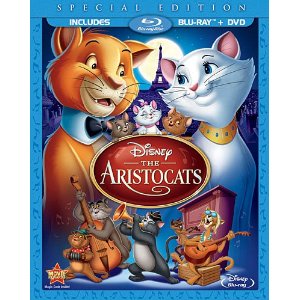 In the of 1910 a delicate and upper-class cat and her three kittens are thrown into an adventure in the streets of when their owner’s butler decides to dispose of them from the house. From here the film follows a familiar story of class issues, although they are not addressed as much as they are in other Disney classics. Immediately after they are left to die by the evil butler who has heard that his master’s estate will be left to the cats instead of him, they are discovered by an optimistic alley cat named Thomas O’Malley. Even though they are from different worlds Thomas and Duchess fall in love during their journey back to their home, and even though it seems like they don’t fit in each other’s world the film proves that the two classes can be joined by the end.
The music in The Aristocats is filled with beloved classics and some great numbers with a French flair and feline fundamentals. The opening song was sung by Maurice Chevalier, a famed singer who came out of retirement just to sing this one last song for the film. Also included in the film’s music is a jazz influence, which shows up in the lower class alley cat’s home, but eventually marries into the upper-class household with Duchess and a closing jazz song with the whole team of cats. Along with the jazzy soundtrack comes some great colorful animation, filling in the holes of the very simple story.
As wonderful as this simplistic Disney film is, following a pattern of choosing an animal and a location to tell a fun story, the DVD was sadly lacking anything impressive as far as special features were concerned. The best part is usually the film, but after a little of time searching through the special features I realized the best ones were just clips of the film that I longed to watch again. There is an unnecessary waste of time with two games, although I can appreciate that a young child may be amused temporarily by these distractions. The Blu-ray release has a few welcome additions, as well as the ones from the DVD which left me unimpressed. The brand-new bonus features include a featurette with Richard Sherman with an alternate beginning sequence, a deleted character and a deleted song with a demo that has the brothers singing together.
The music section merely plays the songs from the film, without any of the dialogue scenes, whereas the backstage section has a little more meat to it, although not much. There is an extremely short featurette with the Sherman Brothers, who created the music for the film. They pound away the songs at a piano and tell the story of their experience. There is also an excerpt from another Disney program, obviously released on television as a way of anticipating the new film about cats. It is just an excerpt, but there is Walt Disney as a host and a cartoon to show the different cats in “The Great Cat Family”. There is also a scrapbook and a deleted musical scene shown with still frames and an old recording.