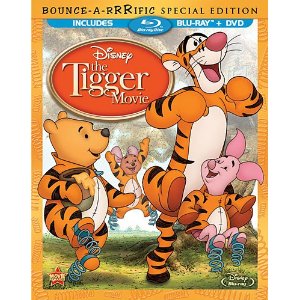 Winnie the Pooh is a character that has stayed the same over years, only slightly adjusted since the voice actors have been changed. The Tigger Movie was a reintroduction of these characters with a few new actors stepping in to do voices, including John Hurt who provides the voice of the narrator. Later Piglet would also get his own film, but the characters are all present and significantly used. The story which takes primary focus, however, is Tigger’s search for his family tree, unaware that it can’t be physically found. Tigger wants to know if there are other Tigger-like animals, and at times is forced to settle with the zealous Roo.
For the first time since Bedknobs and Broomsticks (1971) former Disney composers Richard M. Sherman and Robert B. Sherman created the music for the Disney studios, and it was ultimately the last they would compose for the studio. As a result there is a great deal of emphasis on the music, which is entirely fitting for Winnie the Pooh and gang. The animation also has a nostalgic feel to it, with a much simpler style that makes the film feel comforting and familiar.
The Bounce-A-Rific Blu-ray Edition of The Tigger Movie includes a DVD and an HD digital copy of the film. The DVD special features have been transferred over for the Blu-ray. There are featurettes, including a trivia game, a matching game, a sing-a-long, a DVD storybook and a music video. There are also episodes from “The New Adventures of Winnie the Pooh,” which is actually older than The Tigger Movie and on DVD for the first time here. Exclusive to the Blu-ray are two all-new special features. There is the Disney Intermission feature, which allows viewers to interact and participate in games whenever the film is paused. There is also a featurette about the history and creation of the Tigger character, and how that played into the making of this film.