One in the Chamber Blu-ray review 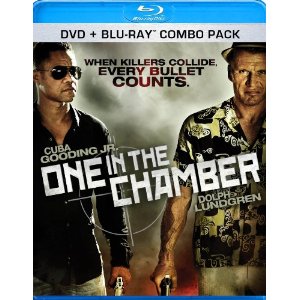 Gooding Jr. has had a strange career. He struggled to get to the top, doing small roles until he made huge waves with one of them. After his supporting performance in Jerry Maguire garnered him an Academy Award, it seemed that the world was at his feet. Instead of making more movies like the one that made him famous, however, Gooding Jr. started making family films in desperation. When those did little to help his career, he began popping up in many straight-to-video action films. Now he seems to have made a niche for himself as an assassin in low budget films, which One in the Chamber simply helps to confirm.
Though One in the Chamber is in every way a straight-to-video action film, it is far better than most. The directing is still poor, the dialogue ridiculous and the supporting acting atrocious, but this one has decent action and the inclusion of Dolph Lundgren to help elevate the film slightly. The storyline isn’t half bad either, pitting two trained assassins hired by feuding crime families against each other.
Ray Carver (Gooding Jr.) is a skilled assassin whose failure at a job in begins an Eastern European mob war. The rival gang hires a man known as “The Wolf” (Lundgren) to clean up the mess, which leads to an inevitable confrontation with Ray. There are many double crosses and twists in the storyline, but we are all truly just paying the price to watch this film in order to see these two stars fight. They do fight, which can appear somewhat comical when considering their size difference, but the action is otherwise fairly solid.
The Blu-ray release includes a behind-the-scenes featurette, though the real reason is the high definition presentation of mediocre action.