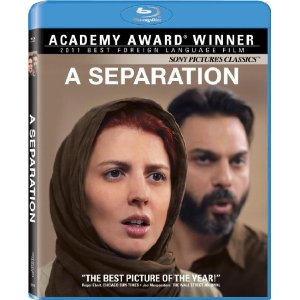 The Best Foreign Language Film winner of this past year was the Iranian drama, A Separation. The film is about the dissolution of a marriage in modern day , but at the center of the film is an event which ends up taking over the plot of the film. It is interesting, because trouble brings the separated couple back together, though their separation is the ultimate point of the film. It is a complex movie in which every character is relatable and logical in their own way, though this does not prevent them from conflicting with other logical and reasonable thinking minds of opposing views.
The film’s highly debated moment comes after a series of events. Simin wants to leave with her husband Nader and daughter Termeh. This is possible because they have visas, but they are also about to expire. In an act of desperation, Simin sues her husband for divorce and moves out to live with her parents. Nader doesn’t want to leave because he feels responsible for his Alzheimer’s-inflicted father. Without his wife to help, Nader is forced to hire a woman to help out. The woman is a devout Muslim, having difficulty with the task of helping an elderly man.
Her husband is even more religious, which is why she keeps her job from him. When Nader returns home to find his father tied to his bed and locked up in his room, he fires the woman, who then sues him after an accident outside of his doorstep. There is a bit of discrepancy over what really happened and who is to blame for what, but it all comes out in court. The interesting aspect of the film is watching the way that Nader and Simin interact during the conflict, and how they return to their stale mate once it has been resolved.
The Blu-ray includes a commentary track with writer/director Asghar Farhadi, as well as two featurettes about the filmmaker.