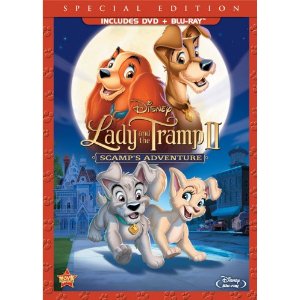 The straight-to-video sequels which come from Disney Home Entertainment aren’t even made in the same studios that created the theatrical originals, so it is no wonder why they never seem to capture the same successful essence. Lady and the Tramp II: Scamp’s Adventure is typical in every way as far as these sequels are concerned, which is far from a stellar recommendation. Even when the animation is close, the story could never be close to the original, which remains one of my favorite Disney films. So perhaps I am somewhat biased.
This time around it isn’t technically about Lady and the Tramp, not only because the story follows different characters, but also because the street dog is female this time and the lady is more of a gentleman. Scamp is the rambunctious only son of Lady and Tramp, who is now completely domesticated. Scamp must have developed the rambling nature of his father somehow, and he is desperate to explore beyond the confines of the yard. This leads Scamp to make friends with a street dog named Angel, giving him the chance to see what it is like on the other side. This makes the sequel somewhat of the same story as the original in reverse, and eventually Scamp makes his way home again.
The Blu-ray combo pack comes with an additional DVD copy of the film. The special features include a sing-a-long for the songs, a puppy trivia track, three bonus cartoons with Pluto, and a making-of featurette. There is also an audio commentary, but the main reason for this upgrade is the high definition presentation of the adequately animated sequel.