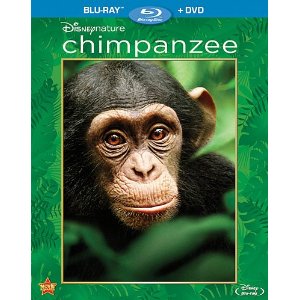 All nature films and television programs are quite spectacular these days, mostly because of the advances in the equipment used to capture the images. High definition nature programs truly became a phenomenon with the success of the “Planet Earth” series, which Disney released as a family-friendly film. Ever since Earth there have been a stream of additional nature films from the studio, including Oceans, African Cats and now Chimpanzee; the most intimately remarkable of them all.
While all nature films and programs now have remarkable images, Chimpanzee stands out with a remarkable story. This is the kind of thing that can’t be planned, and it is miraculous to have happened at all, not to mention on camera. The story follows a young chimp lovingly nicknamed Oscar. When this little chimp is orphaned at a young age, he is forced to look for a new mother in the pack to take care of him. This leads to an unexpected partnership which must be seen to be believed. It is a heartwarming story that is perfect for the whole family, only further enhanced by the spectacular high definition presentation of Blu-ray.
The 2-Disc Combo Pack includes both a Blu-ray and DVD copy of the film. The DVD has three featurettes about nature conservation and Disney’s involvement. These three are all included on the Blu-ray, as well as interesting special features. There is a great making-of featurette, which shows the obstacles faced along the way. Some of these were shown in the credits, but there is much more that was not shown. There is also a music video and a making-of feature for the music video.