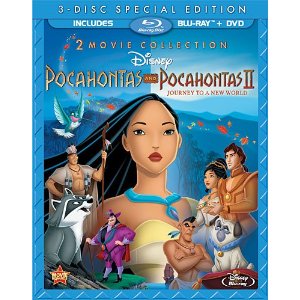 In the minds of many Disney lovers, there were two great periods for the animation studio; the 1940s-60s when most of their beloved classics were created, and during the 90s when a revival of great Disney animation occurred. The 1970s and 80s are mostly ignored, and at a certain point after the stream of good 90s films, the focus disappeared from the studio. That is, until they started releasing Pixar’s film. I would say that it was around the time of Pocahontas, Tarzan and Mulan that the Disney films of the 1990s fell off. Pocahontas may be one of the last great ones, though it isn’t nearly as great as The Little Mermaid, Beauty and the Beast or Aladdin.
Pocahontas takes a stab at a kid-friendly telling of the romance between settler John Smith and an Indian named Pocahontas. They have a star-crossed-lover romance in the new world, with each able to share their different traditions with each other. This romance is destined to be short-lived, though filled with a number of memorable songs and a completely forgettable sequel to bring them back together again. Pocahontas II: Journey to a New World brings Pocahontas into Smith’s world, back in . While the first film taught him to appreciate nature, the second has Pocahontas as the fish out of water.
For the first time on Blu-ray, this 3-Disc special edition has both films on Blu-ray and also on DVD. The Blu-ray has the space to hold both films, whereas the remaining two discs are DVDs of both films separately. Although many purists may not go out of their way to purchase the sequel, there is no denying the appeal of having it available in a double-feature release. There are also a number of all-new special features, including “Drawing Inspiration: The Lost Story of Hiwatha,” which tells the original film was drawn from an idea Walt Disney were once developing. There is also a deleted song by Alan Menken and Stephen Schwartz, which is amazingly fully animated and in high definition. There are plenty more additional features, but nothing is quite as worthwhile as the upgrade in visuals and audio which comes with the high definition presentation.