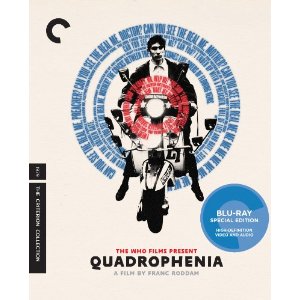 Rock band The Who collaborated with cinematic efforts twice in the late 60s and early 70s, creating two rock opera albums which then became two very different films. They are probably best known for creating the rock opera Tommy, which was made into a film and eventually also became a stage musical. Lesser known is the kitchen sink coming-of-age film, Quadrophenia, perhaps mostly because of the fact that the music simply adds mood and atmosphere to the story rather than taking control. This is a film which fits into the realism and perspective of the British “angry young man” films far more than any type of musical influence.

The Who’s rock album is the basis for Quadrophenia’s story, following a pill-popping teenager in 1960s looking for an outlet to justify his angst. Jimmy (Phil Daniels) is angry at the culture he lives in, despising his mailroom job and all of the people who carry out what he deems a dull existence. Jimmy throws himself into the mod lifestyle, spending all of his money on the right clothing and preparing for a conflict against the rival rockers. A crucial scene in the film takes place during a planned brawl between hundreds of mods and rockers in , where Jimmy is able to feel as though his life has a purpose through destruction.

This is a fleeting feeling, however, which is why the angst and drugs always take a priority in Jimmy’s life and personality. The real reason behind much of what Jimmy does, even the love of mod style to a certain extent, comes from his fascination with a girl named Steph (Leslie Ash). This relationship is childish and unfair, which leads our antihero to bouts of irrational tantrums. He may act like a rebel, but in reality he is just lonely. The only moments not involving Steph which seem to bring Jimmy happiness are those made with other mods that he respects, including a leader played by Sting in one of his early film roles.

The music of The Who is peppered throughout the soundtrack of this coming-of-age tale. There are many great songs, such as “I’ve Had Enough,” “5:15” and Love Reign O’er Me,” but the band remains in the background to the story. The Blu-ray release of this classic includes a new digitally restored high definition presentation of the uncut version of the film, supervised by cinematographer Brian Tufano. The soundtrack is available in the original 2.0 stero as well as a new 5.1 surround mix, presented in DTS-HD Master Audio. There is also a new audio commentary by director Franc Roddam and Tufano and a number of new interviews, not to mention the vintage ones. There are also a few segments from 1960s television programs about mods and The Who. The booklet insert has an essay from critic Howard Hampton as well as a personal history of the mods and Pete Townshend liner notes from the 1973 album.