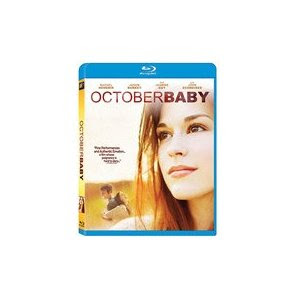 It takes a great deal for a movie to anger me. I’m not offended easily by shocking content or exploitative material, but a poorly made manipulative movie can make my blood boil every time. This is why I can’t stand to sit through the saccharine melodrama of most Christian funded films, and as much as October Baby attempts to disguise itself as mainstream it was clearly made with these type of agendas. We are meant to watch these poorly scripted scenes with one-dimensional characters and be convinced that abortion is wrong. There is simply no other reason for October Baby to exist, and therefore it feel more like propaganda than entertainment.

Unknown newcomer Rachel Hendrix gives us an annoyingly whiny performance as the “victim” of our contrived plot. Hannah (Hendrix) college life seems to be going great. Even though she is only a freshman, Rachel is already starring in the school play, which provides the perfect opportunity for an incredibly predictable and overly dramatic sequence in which she collapses on stage. Her parents and her longtime plutonic childhood friend are in the audience and they rush to her as though it were a life threatening situation. The medical side of the story somewhat vanishes, however. It survives in the story only long enough to contrive a reason for Hannah to discover her parents are not her birth parents.

Discovering that she is adopted is actually only the beginning for Hannah, because this is a film which is determined to make a point about abortion. Hannah was adopted after her mother failed to abort her, making a strong albeit transparent case for a pro-life world. Hannah takes a road trip with her longtime friend, Jason (Jason Burkey), who she is clearly meant to be in love with despite a jealous girlfriend always in the wings of the story. There is an inevitable joining of these two, just like there is a contrived meeting with the birth mother. All of these events are expected within such a predictably manipulative movie, but nothing prepared me for how poorly it would all come together.

The film was co-written by too many people, and then co-directed by a brother team with more experience doing Christian music videos than narrative film. This is apparent, because we are given a cheesy music montage sequence between every scene of poorly written dialogue, forever attempting to force profundity where there is none. All of this is handled with less dexterity than a daytime soap opera. The Blu-ray release has an audio commentary, bloopers, deleted scenes and half a dozen other featurettes and extras. None of them are particularly worthwhile, but this could simply be because I would rather watch paint dry than have to endure any more October Baby.