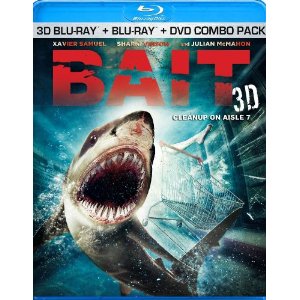 The premise for Bait is clever. The actual film has moments, but none come from the 3D elements of the picture and many of the computerized digital effects are downright embarrassing in 2D. Where the film is successful lies in the elements of suspense far more than horror, and it is just a shame that popular trends and pointless flashiness ruined what could have been a taut thriller. All the same, there are moments within the cheesy horror film which make it rather engaging.

This Australian horror film starts with a shark attack in the ocean. It is one which is only significant in that it leaves our protagonist filled with regret and another character turned to chum. The next significant event takes place when a large tsunami submerges an underground grocery store, and in the process trapping a sharks in the waters. The survivors hide on top of the shelves, though they quickly run out of options as the water continues to rise.

There are many flaws to this film, but the screenplay offers a number of convincing twists and turns in the storyline. More than just the threat of a shark attack is present and there are a convincing number of sacrifices which need to be made in order to survive the aftermath of the natural disaster. The film mostly just gets bogged down by the unnecessary relationships and poor dialogue handled clumsily by the cast.

The Blu-ray release includes a 3D and 2D presentation of the film, as well as a DVD copy. The film’s only special feature is a storyboard gallery.