The Cabin in the Woods Blu-ray review 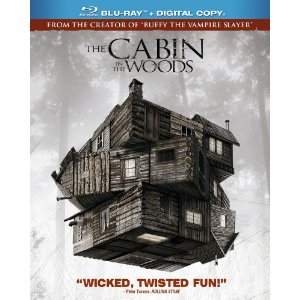 Horror films are as bad as romantic comedies as far as predictability goes. There is a formula to nearly every sub-genre of horror film, from the slasher to the ghost story, and it is these preconceived ideas of what is supposed to happen which help bring the audience into a wholly new horror experience with The Cabin in the Woods. The originality is built upon the expectations which already come with the horror film, making this a clever reinvention of the wheel.

The film begins like so many other horror movies in the last 30 years; with a group of college co-eds going away for the weekend in a cabin buried deep in the woods. There will be skinny dipping, heavy drinking and many gruesome killings. The difference between this and every other horror film of this sort is the reason behind the deaths. Without giving too much away, there are a group of employees who are watching this group in the woods, helping to ensure that they don’t survive the horrors that await them.

The Blu-ray release of this clever horror film also comes with a digital copy and an ultraviolet copy. The special features include an audio commentary by writer/director Drew Goddard and writer/producer Joss Whedon. There is also a making-of featurette and two features on the visual effects, from make-up to animatronics. There are also a number of features to better help you understand the intricacies of the film, from a Wondercon Q&A and a bonus view mode which explains details as you watch the film.