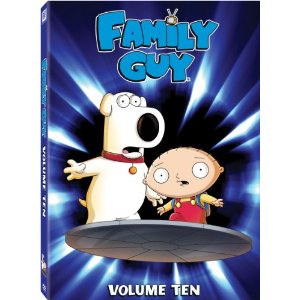 It was different and somewhat shocking when it first became an underground hit, but now it is just getting a little bit old. It is still funny, but it just seems a little bit too contrived at this point. Or maybe the random humor is just getting old. The writers seem to realize that this is happening, and can only poke fun of itself. There are even jokes in this season having to do with the cutaways. One random one has Peter pretending to be Meg for no apparent reason other than to mess with the formula which has grown tired. There aren’t even nearly as many cutaways either, having been done to death in earlier seasons.

The usual flashbacks to the past which are inspired by a comment from one of the characters, often leading in with “This is worse than the time that…” or some variation to that, has been cut back a great deal. To replace these tired tricks there are many more pop culture references, often even placing the Family Guy characters in different mediums or ripping foreign characters out of their own environment and into The Family Guy. When this doesn’t work they just go for shock value, with an emphasis on animal cruelty and racial stereotypes.

They keep attempting to push the boundaries of odd and offensive, and occasionally “Family Guy” still hits the mark. The show is increasingly irreverent and post-modern, with even more jokes addressed directly at the audience. Occasionally we even leave the animated medium entirely, including a lengthy sequence with Peter attacking a screen playing The Sound of Music.

Volume 10 has fourteen episodes in a three-disc set, including the hour-long musical Christmas episode. The special features include commentary tracks on select episodes by series writers, directors, producers and cast members. There are also deleted scenes and a few featurettes on the making of some of the more impressive sequences from this volume, including the Christmas episode’s music and another epic fight sequence.

Your review is what's wrong with TV, not Family Guy. It's one of the only shows that is still funny and entertaining, even the Simpson's has gotten tired. For a show to have been on for 17 plus seasons, they have to be doing something right, and they are, they're keeping the show funny for it's real fans.
Oh, BTW, the reason Peter dressed up like Meg in the episode you talk down about, was to steal the cutaway from Meg, they never want her to get anything special and try hard to keep her down.
So maybe just kick back and smoke a fatty, it's legal now, and enjoy true comedy and entertainment on basic television.
Peace