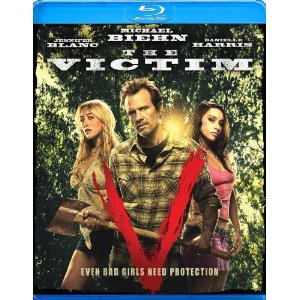 The Victim promises grindhouse thrills and excitement, none of which are properly fulfilled. There is a difference between intentionally cheesy or an homage to bad films and actual bad filmmaking. What is done in The Victim simply seems like a poorly made film rather than a throwback to the old drive in B-films of yesteryears. Worse yet, The Victim is mostly just boring.

The film starts out with a disturbing murder in the woods during a sexual act. This could be considered an accident, but when it is covered up there is no room for forgiveness. Only a lone stripper (Jennifer Blanc) knows about the accidental murder and cover-up, as well as the fact that the murderer was a cop. When she hides out in the cabin of a recluse (Michael Biehn), he then becomes involved in the conflict unwillingly at first and then with a disturbing amount of enthusiasm.

Biehn stars as well as writing the screenplay and directing. The problem is that he doesn’t seem to do even an average job at any of these creative roles. From start to finish, I could not wait for this film to be over. It was a complete disappointment and predictable when it wasn’t just dull. The special features include behind-the-scenes footage of this disaster as well as an audio commentary by Biehn.