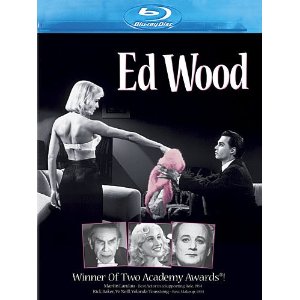 Tim Burton is not typically known for making films grounded in reality. In fact, even the stories which are less fantasy still manage to stylistically bring us into the alternate world of ’s brain. Ed Wood is one of the few exceptions in the filmmaker’s filmography, mostly because it is a biopic based on the life and career of the man infamously known as the world’s worst filmmaker. Surprisingly, this is such a quirky story that there is little need for embellishment or heavy stylization from , though this doesn’t stop him from giving the film a little bit of his own personal touch.

Johnny Depp returns once again to collaborate with and star as the title character, Ed Wood, an enigmatic young filmmaker with a passion for filmmaking which far surpasses the disappointment and failure which follows him. Ed Wood pushes forward with relentless optimism, despite nominal success and consistently bad reviews. Some of his success comes from a lucky friendship he makes with former screen star Bela Lugosi (Best Supporting Actor winner Martin Landau), whereas other times it seems to come only from his bizarre choices. Ed Wood films have the same appeal as a car crash, or photos of the customers of Walmart.

From bad science fiction and horror to a partly autobiographical film about cross dressing, Ed Wood was the king of schlock cinema and has just enough quirks in his own personality to capture the essence of the filmmaker. Ed Wood may not be a typical film for , but it is among his best. The Blu-ray release of this 1994 classic comes with a number of special features from the DVD releases of past years. There are featurettes, one n the make up and another on the production design. There are deleted scenes and behind-the-scenes footage, and even a music video. The highlight of the bonus features is the audio commentary with select cast and crew members, but the of the Blu-ray is the enhanced high definition picture and sound.