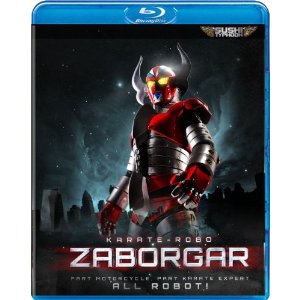 Although Zaborgar is a change from the usual horror films to come out of Sushi Typhoon Studios, and is subsequently less gore-filled or horrific, there are still many of the bizarre sexual elements that these films are known for. Female robot villains have rockets which come from their breasts and dinosaurs (yes, dinosaurs) which come from their rectum. This is all just par for course when dining with Sushi Typhoon.

The storyline is a superhero film of sorts involving two brothers; one human and one robot with the ability to transform into a motorcycle. This spectacularly cheesy concept comes from a popular Japanese television series from the 1970s, adapted for the big screen with a little more raunch and just the same amount of absurdity. When the human brother, Daimon, falls in love with the female robot enemy, the result is astoundingly bizarre and must be seen to be believed.

The whole endeavor is lighthearted fun, though I wouldn’t recommend some of the humor for younger audiences. Even if this is a tamer Sushi Typhoon, it still bears the mark of the studio which has the feel of a Japanese version of Troma. The Blu-ray release of Zaborgar includes a series of short films and trailers.