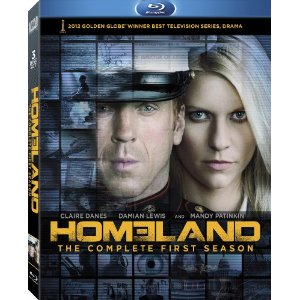 When “24” came out it was the first post-9/11 terrorist thriller on television, and for a few years it seemed cutting edge. Even with the absurdity of the time constraint gimmick, “24” had moments of brilliance, and it provided a cathartic and patriotic win against terrorism. After that series had been done to death, writers Howard Gordon and Alex Gansa have moved on to loosely adapt the Israeli series entitled “Hatufim,” which means Prisoner of War.

This is a much more complex and character driven series than “24” was, filled with a certain amount of intensity and action, but more slow-burning and realistic. It follows the suspicions of CIA agent Carrie Mathison (Golden Globe winner Claire Danes), a bipolar woman with an obsession that threatens her career. When a marine is rescued after being a prisoner of the Al Qaeda for years, Carrie suspects that he may have been turned. Sgt. Nicholas Brody (Damian Lewis) returns home a different man, which is apparent to his family as well as Carrie. The question remains whether this is simple post traumatic stress or whether Brody has been turned into a sleeper agent plotting a terrorist attack against the country.

Season one provides just enough to tease you into wanting more. There are twelve episodes in this three-disc Blu-ray set. The special features include a prologue to season two, as well as a featurette on the first season. There are also deleted scenes and a commentary track on the pilot episode.