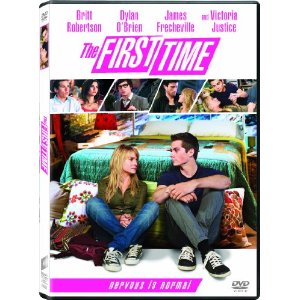 Please allow me to put aside usual formalities taken when reviewing films to appropriately describe my feelings after watching The First Time. Let me first ask, how the hell did this independent film impress me more than any other teen romance I have seen in the last few years? How did this film have dialogue far more compelling than much of Tarantino’s latest screenplay? (Regardless of the Academy’s decision, Inglourious Basterds is a masterpiece but Django Unchained was sloppy work for the filmmaker). But most of all, as I watched The First Time, I was thinking the same thing over and over again. Fuck Juno and Fuck 21 and Over. Give me more movies like this.

What is wonderful about the teenagers and the way they behave in The First Time is the fact that they aren’t typical teenagers. They are dynamic and interesting. Dave (Dylan O’Brien) is a gentleman and a romantic, even though it isn’t popular to be so. Jane (Victoria Justice) doesn’t believe in Facebook or Twitter and prefers having face-to-face encounters. These aren’t the hipster too-cool for popular things either. They aren’t likely to get knocked up just out of boredom, and when they inevitably have their first time, it is treated more sensitively and honestly than I have ever seen on film before.

Written and directed by Jonathan Kasdan, The First Time is a sweet and charming film that gives teenagers today a film that they can relate to, rather than watching a film that they are supposed to look up to and envy, which is usually just a film filled with heavy partying. There are several parties within The First Time’s storyline, but the most significant things that happen at them is dialogue related. The only sequence with topless girls seems out of place. Even the actors in the scene seem a little surprised. The First Time has a few moments like this, unnecessary to say the least. It isn’t a perfect film, but comes far closer than any big budget romance from this past year, all Nicholas Sparks adaptations included.

did whoever write this review watch the film