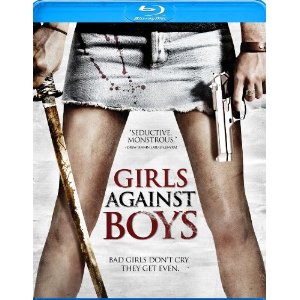 The flippancy towards violence of all manners within Girls Against Boys is more than a little sickening. It isn’t quite clear if director is writer/director Austin Chick is addressing the violence in this matter as a form of commentary, or simply because the filmmaker is as desensitized to violence as the characters within the film seem to be. Either way, it makes for some socially awkward moments that may make for uncomfortable viewing in any audience member reading any level of seriousness from the plot.

In something of a manipulative evening, Shae (Danielle Panabaker) goes out with her mysterious co-worker, Lu (Nicole LaLiberte) for a night of fun. By the end of the night, Shae has been violated by a man she met at a bar, giving Lu the perfect opportunity to share her particular madness. The pair hunt down the man responsible for Shae’s attack, but Lu ruthlessly assassinates any male they come into contact along the way, innocent or otherwise. This tears down the relevance, making this less of a revenge film and more of a spiteful psychopath killer type of a film.

After the revenge has been had we are meant to believe that they got away with all of the killings without a hitch or suspicion from the police. Even more unbelievable is the fact that Shae seems hardly affected, immediately rebounding with a nice guy from her class. Lu is not so willing to move on after the mass murder, wanting to continue a rampage against all men, for no reason we are ever given other than for the mere pleasure of it. As cool as this film may be, it is sloppy filmmaking that doesn’t bother to look past the artifice of the image to the reasoning behind each character’s actions.

The Blu-ray includes a commentary track with filmmaker Chick and actress Panabaker.