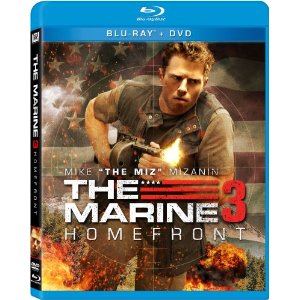 WWE knows a good thing when they have found it. Why else would they still be doing their gaudy 80s wrestling shows? I know that there are people who get very into WWE and may find it insulting that I call it a show, but that is what they are doing. They put on a show for audiences, and ultimately all of the wrestler must be actors and performers first of all. This is why it makes complete sense for the franchise to start making movies. Action films do a great deal to promote the stars of WWE, even when they move on the bigger things. We all know how Dwayne Johnson got his start.

John Cena was given the spotlight for the first Marine film, and then it was Ted DiBiase’s turn for the sequel. This time around it is Mike “The Miz” Mizanin, who stars as Sgt. Jake Carter, who is on leave when his sister is abducted by a band of violent extremists planning a deadly terrorist strike. With the authorities unwilling to risk saving his sister, Jake goes on a one-man rampage against the terrorists.

On par with the first two films, there is plenty of hand-to-hand action, as well as some good gunplay. The simplicity of the first film is missing, and this one is easily the least believable for a myriad of reasons. That being said, the action is still hard-hitting and moderately engaging in the way that this type of film is meant to be. You won’t be challenged, but if you are lucky you will be entertained.

The Blu-ray includes a number of features, including a journal from the star, several featurettes about him, and one about casting choices. There are also a few featurettes about the intricacies of filming on a boat set.