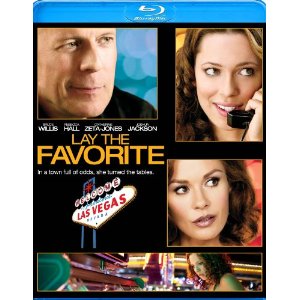 To be honest, I was expecting more from Stephen Frears. There is nothing wrong with Lay the Favorite, but I found myself more irritated than entertained. This is mostly because I was expecting more about the world of gambling, since the film is based on a expose on the underworld by Beth Raymer. Instead of focusing on these interesting details, the movie wastes no time to give way to romantic melodrama. Perhaps in another film I would have been more interested in the characters than the secret underworld of professional gamblers, but not in this film and not with these characters.

We are essentially given one secret of gamblers, which is the way that they place throwaway bets just to change the odds before making their own real bet. Once we are given this fact, the remainder of the film is essentially just a film about romantic entanglements. Former stripper Beth (Rebecca Hall) wastes no time in getting close to her gambler boss, Dink (Bruce Willis), despite his marriage to a feared woman (Catherine Zeta-Jones).

When she separates herself from that situation, Beth then becomes involved with another guy (Joshua Jackson), but her gambling career keeps her from pursuing it. If only we saw more of the gambling or if only there were a way to make gambling more interesting to watch, Lay the Favorite may have been a more engaging film. I understand the choice to make relationships just as dominant as the gambling; I just wish that the melodrama were more interesting and less predictably cliché. I guess that is what you get when borrowing from real life.