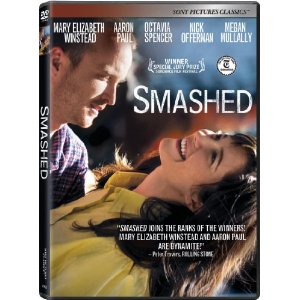 Smashed is an extremely honest film, which is not always an easy thing to sit through. Life is difficult enough without having to experience the pain of someone else’s life as well when escaping to the movies, which is probably why most audience members would rather choose an evening watching a werewolf fight against a vampire over the love of a silly teenage girl. But for those looking for something with more depth, and performances that put most Academy Award nominees this past year to shame with brazen honesty, Smashed is a treasure. Though I don’t imagine I need to see it again any time soon, I would highly recommend this film.

Mary Elizabeth Winstead carries the film as Kate, a young school teacher who still spends every night drinking heavily with her irresponsible musician husband, Charlie (Aaron Paul). When these nights of heavy drinking begin to get out of control for Kate, she realizes that it may have become a problem that is taking over her life. After vomiting in front of her first grade class, she tells people she is pregnant to avoid telling the truth. This inevitably disastrous situation paired with several nights of waking up in strange places leads Kate to seek help, turning to a new group of friends in AA (Nick Offerman of “Parks and Recreation” and Octavia Spencer from The Help).

There are some moments within the film that are a bit too awkward, perhaps unnecessarily, but the one thing that always remains within the film is sincerity. Never for one moment did I doubt that anything in the film could really have happened, but Smashed also somehow manages to refrain from cliché and predictable territory. It is truly an original and honest film about addiction; somewhat heartbreaking, but excellent in every way.

The DVD comes with a commentary track with director and co-writer James Ponsoldt and Mary Elizabeth Winstead. There is also a making-of featurette, some footage of the screening and Q & A, and some deleted scenes.