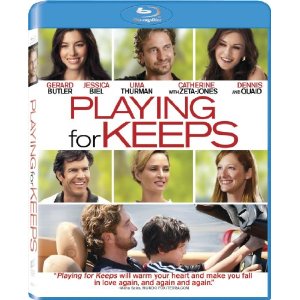 I went into Playing for Keeps with no previous knowledge. I had not seen the trailer, and had no idea what type of film it was. All I knew was the cast of actors, and the cover of the film shows two leading men and four leading ladies, so it was unclear to me if this was an ensemble romance or if there was one special couple amongst those six actors. At a certain point during the beginning of the film, I though this might not even be a romantic comedy at all; I imagined it to be a father/son bonding film, perhaps through the love of soccer. But this is a romantic comedy, just one which is poorly constructed and defectively conceived.

Gerard Butler has had a string of bad romantic comedies, but at least the others with a little less chaotic. There is a cast of actors involved in this film, all of whom seem to be giving it their all to be humorous. They very bravely go over-the-top and without any apparent guidance or restraint from the director. The one thing this film seems sorely lacking is direction, which is perhaps why it is so unclear what we are supposed to be rooting for. Much of the film had me cringing. I felt bad for the actors involved.

Butler stars as a piece of man-meat who was once a soccer star, but now he just provides opportunities for gorgeous, desperate soccer moms who throw themselves at him when he starts coaching his son’s team. This coaching takes up very little screen time, though it introduces most of the extraneous characters, from fast-talking soccer dad (Dennis Quaid) to a slew of moms (Catherine Zeta-Jones, Uma Thurman, and Judy Greer). Jessica Biel also stars as the mother of our protagonist’s son, though her character is rather two-dimensional.

The Blu-ray includes deleted scenes, a featurette about the casting and a making-of feature.