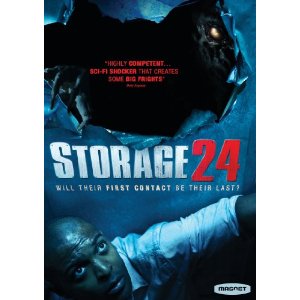 Alien invasion films are on the rise all over the world, including . There is nothing altogether original about Storage 24. It confines a group of seemingly helpless humans in a confined space with an unpredictable alien, who slowly picks them off. Usually the confined spaces in these films are due to the constrictions of space travel; they may be in a space station or a spaceship, or otherwise confined from escaping. In this particular film, the confined space is a storage locker that the victims are trapped inside.

There is far too much melodrama with the characters, but in the end it is all rendered insignificant anyway, so I won’t bother to go into great detail. Shelley goes to her shared storage facility with a couple of friends after breaking up with her boyfriend, Charlie. Charlie arrives with a friend of his own. This group along with some random workers and security guards are all trapped inside when a military cargo plane crashes, releasing an alien in the storage facility with them.

The film tries too much to have characters that have relationship issues and other melodrama that doesn’t really matter. All of this seems sloppy and forced, whereas the effects and the deaths are much more complexly created. This is a film which savors the gore in each blood-spurting, skull-crushing moment. This is not for everyone, but those who appreciate it will also appreciate the quality with which it was completed.

The DVD includes deleted scenes and a slew of behind-the-scenes featurettes in the special features. There are also several video blogs, a feature-length commentary with actor Noel Clarke and director Johannes Roberts, as well as select-scene commentaries. There are a ton of features, especially for a film like this.