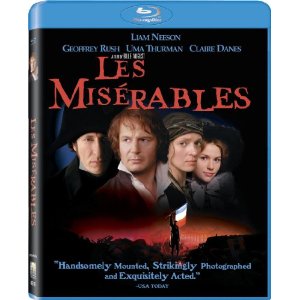 Just in time for the release of the new theatrical musical version of Les Misérables, the theatrical version of the adaptation of the book (as opposed to the musical) from 1998 has been released on high definition Blu-ray. Although it does not have the songs that many associate with the story, all of the characters and magic from Victor Hugo’s novel are included, for the most part.

Liam Neeson stars as Jean Valjean, a convict who is transformed by an act of kindness and rises up to be a man of virtue. When a prostitute named Fantine (Uma Thurman) begs Valjean to raise her child, Cosette (Claire Danes), it is an opportunity for the convict to redeem himself. At the same time a determined police officer named Javert (Geoffrey Rush) is determined to put Valjean back behind bars, and all of this takes place during the French Revolution.

The cast is wonderful and director Bille August is able to provide a concise telling of the story in just over two hours. Though the latest version is likely to be more popular, simply because of the musical aspects and a new cast, this is an admirable adaptation of Hugo’s classic tale. The Blu-ray includes a featurette, though the high definition presentation is the true reason for this Blu-ray. Even that is somewhat unspectacular, seemingly rushed just to have this on shelves in time for the new theatrical release.