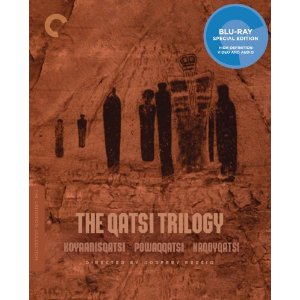 Godfrey Reggie’s Qatsi trilogy began with Koyaanisqatsi (1983), an unconventional film which utilized the visual aspects of cinema with a score by Philip Glass. The result was the creation of a new type of film, commonly referred to as Soundscapes. The trilogy was completed with Powaqqatsi in 1988 and Naqoyqatsi in 2002, though there have been many other films which have followed in the same footsteps of Reggie, Glass and cinematographer Ron Fricke. This trilogy is the epitome of soundscapes, and each of movies has a precise theme which is only clear upon the revelation the title’s meaning.

Using spectacular photography and time-lapse effects, Koyaanisqatsi catalogues the marked changes in the environments of the Northern Hemisphere. From the shifts in nature to the increasing reliance on technology by humans, the photography and music allow an understanding of the themes without the need for dialogue. From a rocket lifting off to a simple aerial shot, there is a magnificence in the Qatsi trilogy that is more impressive than any of the Imax or 3D spectacles of today. The film is featured in a newly restored digital transfer, approved by Reggio with 5.1 surround DTS-HD Master Audio soundtrack. The special features include an interview program with Reggio and Glass discussing the film, as well as new interviews with Fricke and Reggio. There is also an early demo version of Koyaanisqatsi.

Powaqqatsi shifts to third-world countries when he chose to focus on the Southern Hemisphere for the follow-up to Koyaanisqatsi. The visual style is shifted somewhat also, with far more segments in slow-motion, forgoing the time-lapse photography which was essential to the first film. This film shows the ways of the Southern Hemisphere, before showing the manner in which these traditions are destroyed or altered for the sake of industry. Glass returned to score the film, though his sound also changed to adjust to this particular theme. The Blu-ray release includes a newly restored high-definition digital transfer, approved by Reggio, with 5.1 surround DTS-HD Master Audio soundtrack. The special features include an interview program with Reggio and Glass discussing the film, as well as new interviews with Reggio and an extra short film, Anima Mundi (1989). This is a film of over 70 animal species in 28 minutes, created by Reggio.

The final film in the trilogy takes on the digital revolution. Naqoyqatsi utilizes both slow motion and time-lapse, not to mention found footage and computer generated imagery. The film series comes full circle with the theme of a world shifting from a reliance on the natural to the artificial. The use of virtual reality within the creation of the film brings this message full circle in an embracement. This time around Glass is joined by cellist Yo-Yo Ma. The Blu-ray release includes a newly restored high-definition digital transfer, approved by Reggio, with 5.1 surround DTS-HD Master Audio soundtrack. The special features include a making-of documentary as well as a video afterward by Reggio on the making of the trilogy. There is also a panel discussion on the film with Reggio and crew, as well as interviews with Glass and Yo-Yo Ma.