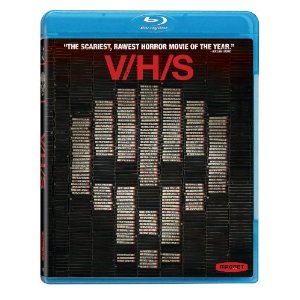 The found-footage sub-genre of horror has been done to the point that it has little of the effect which once propelled these films. We no longer look at these movies the way we did The Blair Witch Project, but the medium proves to have a few tricks remaining with this anthology horror film from some newcomer horror directors. Although I have never been much of a fan of anthology horror films, V/H/S has a few moments which shouldn’t be missed by any horror aficionados. Unfortunately, there are also a lot of moments in-between which are easily missed and even more easy to forget.

A great deal of the film seems to be footage taken from the camera of men who use it in the most disgusting ways imaginable. Our wraparound storyline involves a group of pigs who videotape assaults on women in public, forcing them to flash the camera unwillingly. When they are offered a large sum of money to rob a house and find a videotape, they tape this hunt. They are slowly picked off, and in the meantime we are given the opportunity to watch several found footage tapes while they search for the one they were sent in to get. The storyline of the one VHS tape they are meant to retrieve is never really developed entirely, but it provides the necessary frame for all of the other short horror stories.

Right away we jump into more vulgar men behaving badly on camera, this time determined to film a sexual act with an unwitting female brought home from the bar. When a strange and creepy woman comes back to their room with them, they end up with more than they bargained for. Another hotel room story involves a slow burning suspense story about a couple on a vacation when a nightly visitor starts intruding on their privacy. There are stories which range from serial killer horror all the way up into the most extreme paranormal horror tales. The most frightening sequence of the film is an escape from a haunted house, also the one film to show men on a more admirable note. The effects in the sequence are over-the-top, albeit fantastically achieved.

At nearly two hours, this is a bit long for a horror film, and there are certainly sequences which seem to drag the film down. At the same time, I can’t help but recommend it for the moments that work really well. The Blu-ray only further enhances the stronger special effects in the film, with a ton of additional features to add to the experience. There is an alternate ending for one of the sequences, as well as additional footage for another. The film comes with an optional audio commentary with cast and crew members, as well as a number of making-of features and webcam interviews.