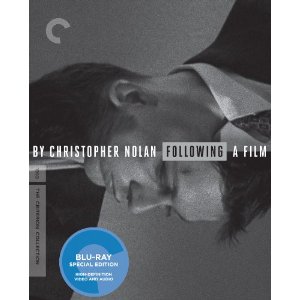 Christopher Nolan may most recently be known for his contribution to the Superhero trend in films, more specifically for his direction in the revival of Batman and as a producer in the newest Superman film, but none of this would have been possible without Following. Few filmmakers have such a clear tendency towards a certain type of films, and Nolan showed an interest in non-linear and twist-filled stories from his debut, Following, made on a shockingly simplified budget. Before the revenge-mystery Memento, Nolan made this simple film noir on 16 mm.

Despite being told out of sequence, Following is reminiscent of many classic Alfred Hitchcock films in the sense that it involves an ordinary man being pulled into a world he is unfamiliar with. When an unemployed aspiring writer (Jeremy Theobald) needs inspiration, he gets in the habit of walking around his neighborhood. He follows strangers in search of inspiration for his writing, which comes in an unexpected manner. When the young man follows a man named Cobb (Alex Haw), who is a thief in the process of a home break-in when the writer first encounters him.

These two develop a relationship, which eventually leads the young writer into a criminal world he is unprepared to handle. The only other characters in the film is a policeman and the film’s femme fatale, known in the credits only as Blonde (Lucy Russell). In many ways, even the non-linear way in which the story is told can be traced back to days of classic film noir, and is a tradition that Nolan would carry on in a more complex manner in his next film, Memento.

The Blu-ray release of Following comes with a newly restored digital transfer of the film, supervised by Nolan, along with an uncompressed monaural soundtrack and a new 5.1 surround mix rerecording by mixer Gary Rizzo. The film comes with an option audio commentary by Nolan, as well as some new interviews and a three-minute short film by the director. The film is also available in a chronological edit on the Blu-ray, and an insert with an essay by film critic Scott Foundas.