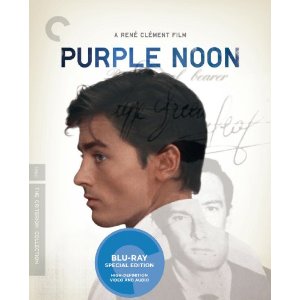 Before Anthony Minghella’s adaptation of Patricia Highsmith’s “The Talented Mr. Ripley,” French director René Clément made Purple Noon (Plein Soleil). Created just five years after the release of Highsmith’s novel, Purple Noon aligns much closer to the book than the later version starring Matt Damon and Jude Law, while adding a bit more believability and realism to the criminal acts than are found in literary form. The result is a fantastic film, both gorgeous and meticulous in detail, surely one of Clément’s best and the film which made Alain Delon a star.

Delon stars as Tom Ripley, an American who has traveled to in search of a trust fund young man named Philippe (Maurice Ronet) and convince him to return home to his father in . Ripley is something of a savant, able to forge signatures and imitate others. He uses this ability to plot out a way to take over Philippe’s life in , though this effort does not come without huge obstacles. The largest is Philippe’s unsuspecting on-again/off-again girlfriend, Marge (Marie Laforêt).

What is truly remarkable about Purple Noon is the amount of effort taken to show us how Ripley would be able to accomplish what he does, without forcing the audience to sympathize with him or even understand why he would. There is no need for motive or explanation, as greed is quite clear to see. Delon is marvelous as a carefree Ripley, almost appearing as a child who is proud of his ability to fool others with lies and trickery. He marvels himself smarter than those around him, at one point even openly discussing his murderous intentions to his victim.

The Blu-ray release of this classic French thriller comes with a new digital restoration presentation, including an uncompressed monaural soundtrack. The special features include a new interview with Clément scholar Denitza Bantcheva, as well as archival interviews with Highsmith and Delon. The package comes with a booklet insert with an essay by film critic Geoffrey O’Brien and an excerpt from an interview with Clément from the early 80s.