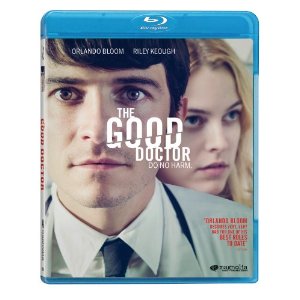 The Good Doctor is a disturbing little thriller, understated in a way which makes it all the more believable and terrifying. I have never much cared for actor Orlando Bloom, but he gives a subtle and chilling performance as Martin Blake, a young doctor whose insecurities are matched only by his ambitions. This pairing of these two characteristics proves deadly in the hands of this unstable doctor, making for a smart little serial killer film.

Martin wants to be a doctor for all of the wrong reasons, caring little about human interaction and much more about the prestige that comes with the profession. Expecting everyone to fall at his feet now that he is a doctor, Blake is unsettled to find the nursing staff treating him as an equal and less. He becomes so disturbed that it throws him off of his ability to perform, which threatens his future ambitions. Unable to allow this, Martin finds a way to force an outcome he desires.

When an eighteen-year-old girl named Diane (Riley Keough) with a kidney infection comes into the hospital, it provides Martin with the opportunity he needs. His desire to obtain Diane for himself is matched only by a desire to advance his medical career, and soon Diane’s safety is put at risk so that Martin can keep her in the hospital. Soon he must take further action to cover up what he has done. This is what Tom Ripley would look like as a doctor.

The Blu-ray release includes a making-of featurette, as well as a short promotional video shown on TV and a theatrical trailer.