The Forgiveness of Blood Blu-ray review 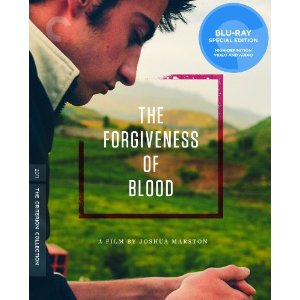 The Forgiveness of Blood is American filmmaker Joshua Marston’s follow-up film to the 2004 Oscar-nominated Maria Full of Grace. Although his debut was about a Columbian woman working as a drug mule and this film is about an Albanian blood feud, both films are coming-of-age tales. They tell the unique stories to specific regions, and are done with an accuracy which brings the audience into a different environment before watching as out protagonist finds a way of escaping for the sake of their own future. In Maria Full of Grace it was done through criminal activity, whereas the law has little significance within The Forgiveness of Blood. The customs within this film are much older and pay little heed to what the laws expect of them.

Set in northern , the film starts with a sense of tradition and routine, though changing times have made for some difficult growing pains. The dispute the entire film comes from is a simple one; there is a piece of land which was once owned by the family of a bread delivery man, and when it is redistributed he is forced to change the path he has taken in his cart every day for work. This dispute leads to blows, which we don’t actually witness. It isn’t important who is exactly to blame or what happened. All that truly matters is the aftermath of the altercation, with a father forced to go into hiding and a family left to deal with the aftermath.

The blood feud says that if any male member of the family is seen in public, they can be killed as revenge. This is a real threat which forces our teenage protagonist into house arrest. Until the conflict is resolved, he is forced to remain at home and indoors. Meanwhile his sister must continue the bread delivery for her family to survive, as the only capable member allowed in public. The adults are secondary characters within this fictional film based on highly researched material, with the teenagers and their reaction to events out of their control taking the main focus in the story.

The Blu-ray includes a new high-definition digital transfer, approved by the director of photography, Rob Hardy, with a 5.1 surround DTS-HD Master Audio soundtrack. The special features include an optional audio commentary with director and co-writer Joshua Marston, audition and rehearsal footage, and a series of interviews. The booklet insert has an essay by film writer Oscar Moralde.