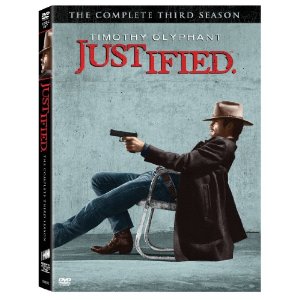 I’m not sure how accurate the police work is in “Justified,” but it is certainly more compelling drama than most cop shows in recent history. In the opening sequence of the “Justified” pilot, Deputy Marshal Raylan Givens (Timothy Olyphant) approaches a drug cartel hit man that he has threatened to shoot if he doesn’t leave . This promise is followed through, but only after the hit man pulls a weapon, making the shooting justified (get it?). Although the shooting was justified, Raylan is under investigation for his behavior, and he is sent back to his hometown as a punishment. With his personal knowledge of Harlan County, Kentucky, Raylan happens to also be the perfect candidate to take down a local crime family.

Based on the short story “Fire in the Hole” by crime novelist Elmore Leonard, “Justified” works as an adaptation which allows room for growth. I suspect several more seasons will follow. Timothy Olyphant has a strong presence as the lead, and he has plenty of experience carrying a western-type show. This may not be “Deadwood,” but it is an enjoyable crime show nevertheless. The premise has begun to run a little bit thin by the third season, though all of the elements which made the first ones a success still remain. He is still a lawman who often operates outside of conventional law, and surrounded by corruption this becomes a necessary approach.

All season three episodes are included in this 3-disc set. Special features include four cast/crew commentaries on nine episodes, outtakes, deleted scenes, a set tour and several featurettes. There are new bad guys and new storylines, but the drama in season three is no different than we have seen in previous seasons of “Justified.”