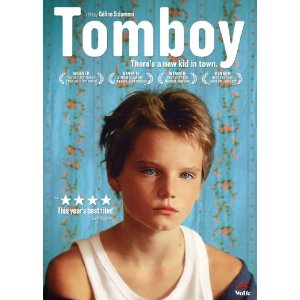 Tomboy tells the story of a ten-year-old girl with no interest in being a girl. Her parents have grown accustomed to the short hair cut and boyish clothing, allowing the prepubescent child the freedom to be and act the way she wants to. She looks so much like a young boy that it allows the young girl the freedom to create a new personality when she arrives in a new town with her family over summer.
The young girl is Laure (Zoé Heran), though she begins calling herself Mikael and passing herself off as a boy with the neighborhood kids. This allows Laure to participate with the boys in all of the rougher activities, but it also draws the attention of the group’s one female leader, Lisa. Lisa and Laure begin a hesitant and experimental relationship with each other; all the while Laure is under the guise of Mikael and forced to hide the truth.
Tomboy is a slow build to the revelation that Laure makes about the truth at the end of her summer. Once school begins, there will be no way to hide her true name or identity, a fact that slowly creeps up on her after the excitement of the situation wanes. Heran carries the film without having to say much; we can see the inevitable discomfort that the truth will bring her. Much of the film’s power comes from this powerful young performance.
This remarkable little French film comes out on DVD with a behind-the-scenes featurette and a trailer.