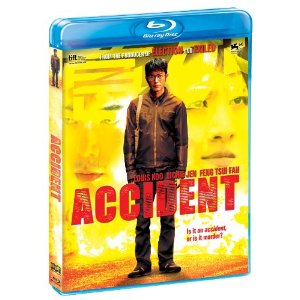 Accident is a gripping film of twists and turns, suspenseful from beginning to end while never conforming to a recognizable story structure. This is one of the few suspense films which cannot be figured out easily, despite a rather simple storyline. Paranoia and conspiracy intermingle in a way which hasn’t been so successful since Francis Ford Coppola’s The Conversation.
Director Soi Cheang (Shame, Dog Bite Dog) and producer Johnnie To (Election, Vengeance) bring to screen the unique vision of a group of assassins who only kill people through staged accidents. In the opening sequence we watch as a traffic jam and a series of convenient coincidences cause the demise of a Triad gang leader. It all appears to have been an accident, but soon we discover that there is a team which orchestrated the entire event without detection. The intricacies of these deaths are as complex as those devised by death in the Final Destination series, only with intellect guiding it instead of an invisible vengeful force.
The group is headed up by Ho Kwok-fai (Luis Koo), who is known by his colleagues as “The Brain.” As the head architect of these choreographed accidents, Ho begins to question the amount he can trust those around him when one of the members of his team is killed by an accident. After years of constructing assassinations which appear accidental, the paranoid hit-man cannot accept coincidence as an explanation. Convinced that an insurance agent named Chan Fong-chow (Richie Jen) is somehow responsible, he begins a cat-and-mouse investigation, trusting nobody along the way.
The Blu-ray includes a making-of featurette as well as a trailer. The high definition presentation is impressive in some sequences, though much of this film is a slow burn and not one with many flashy effects or action sequences.