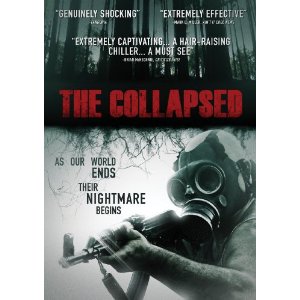 We have come to the point where post-apocalyptic films are so commonplace that they are no longer restricted to horror films. There is a whole new wave of post-apocalyptic films in genres ranging from science fiction and horror all the way to straight drama and comedies. The only notable aspect of The Collapsed is the mere fact that it was made on a budget of $150,000. There are minimal action scenes and very little special effects, leaving only suspense and a solid story to hold the film up. Unfortunately, The Collapsed is only partially successful with each of these, and dialogue and acting are enough to nearly make the film unwatchable.
The story is so familiar that it is almost cliché at this point. A family of four escapes the city after the apocalypse, searching for a way to survive in the wilderness. We don’t know why civilization has fallen, but other humans are a threat and must be avoided. The family is led by the father (John Fantasia), and also includes his wife and two fully grown adult children. Together they try and survive the harsh conditions, violent men, and a mysterious force in the woods.
The biggest problem with this film seems to be the dialogue, which also has a tendency to weed out the worst of the actors. Although the two children are obviously fully grown adults, the dialogue has them acting as though they are still children. This provides opportunity for some of the worst film acting I have seen in quite awhile, and I am not ashamed to say that I was happy to see these characters eventually being killed off.
Stay away from this film unless you are looking to laugh at the awful acting and cheesy dialogue. There are a few mildly admirable qualities to moments of the film, but they are too few and far between to even mention, much less remember. This is the type of film which impresses at festivals and falls flat whenever attempting any type of distribution outside of that world.
The DVD includes a number of special features, including a commentary track with writer/producer/director Justin McConnell, whose credits have only included short films and documentaries up to this point. Also included in the commentary is co-producer Kevin Hutchinson, and there is a second commentary track with actor John Fantasia. There is also an online viewable making-of documentary and a music video.