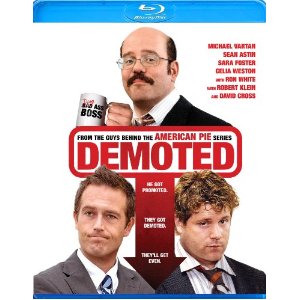 With a little bit of Office Space and a little bit of “The Office,” Demoted is a work-based comedy which carries feminist-based themes within a raunchy and rude exterior. The story and every character within Demoted is as transparent as though this film had already been made, even when elements vary away from other office-based comedies. Even when it is unique, there are few surprises to be had. Somehow each moments of Demoted seems inevitable. It’s like a bad fast food meal. You may see the display pictures of the burger neatly stacked and feel your appetite whet, but it only takes one trip to McDonalds to know that the actual product will be shoddily thrown together for ease and profit.
Rodney (Michael Vartan) is engaged to the daughter of a successful businessman, and he finds himself lying about a promotion he received at his job as a tire salesman. In reality, the promotion is actually a demotion when Rodney’s beloved boss dies after a night of excessive drinking and dancing at a local strip club. Rodney and his degenerate friend Mike (Sean Astin) have spent years as the top dogs in sales at the tire company they work for, but when their ridiculed colleague (David Cross) is promoted, he decides to punish them by demoting them to the position of secretaries.
Rodney and Mike must learn what it means to work hard and drop their chauvinist attitudes once they are forced into this demeaning and belittling position, while also seeking revenge against their new tyrant of a boss. We know that the strip-club attending salesmen will become better men for having to endure the hardships of the secretaries, just like we know that the cross-dressing co-eds in Sorority Boys will become more sensitive while living with a sorority of rejects. This is what I call sex-comedy feminism. A raunchy storyline no feminist would enjoy eventually ends with a moral that they would appreciate.
The Blu-ray has no special features to speak of and the high definition is hardly worth mentioning. The film itself is also hardly worth mentioning, featuring a number of recognizable actors in entirely forgettable roles.