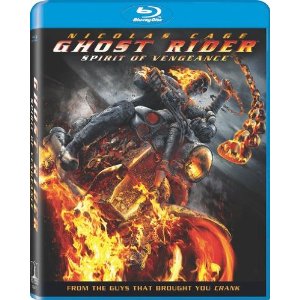 Of the many superhero movies in the past decade, ’s Ghost Rider was among the most disappointing. Although the premise based on the darker Marvel comic promised a supernatural vigilante justice, the PG-13 adaptation by filmmaker Mark Steven Johnson (Daredevil; not to mention the recent disastrous foray into romantic comedy, When in Rome) was a dull exercise in mediocre special effects. There was no edge to the 2007 film, but it made enough money worldwide for the creation of a sequel, which has much more promise than the original film, despite being far from perfect. The increase in entertainment in the sequel is all thanks to the directors chosen.
Neveldine/Taylor are best known for a hyper-kinetic postmodern style of action, most notably on display in the violent Crank films. Though their directing filmography is void of PG-13 action, they wrote the screenplay for the upcoming Jonah Hex. Cage’s unbridled energy actually matches better with Neveldine/Taylor’s full-throttle approach to filmmaking, though he still comes off as the weakest element in the film. Either way, the biggest problem about the comic book character on film is that he is nothing more than a flaming skeleton during action sequences. This makes the leading actor nearly irrelevant during the action, making the filmmakers the real stars. Though I don’t agree with every choice that Neveldine/Taylor make, I would rather see someone take risks rather than another cookie-cutter superhero film. This still may be a PG-13 film, but these pair of directors pushes the limits and add a style that is engaging regardless of quality.
Much of the success lies in the style of the film. What must be overcome is the silly yet simple storyline and Cage’s acting. Cage’s return as Johnny Blaze means many scenes of overacting in-between the energetic action. This time taking place on the road in a remote portion of , where our anti-hero is recruited to help save a young boy whose soul has also been sold to the devil by his mother. Blaze doesn’t believe he has the ability to save anyone and only agrees to help if it means getting rid of his curse as the Ghost Rider.
The story is almost insignificant as soon as the action starts up, and that is when the film truly takes its place above the awful first attempt at this comic book adaptation. All of this is worth seeing and also highly enhanced by the Blu-ray high definition presentation. The special features include a few deleted scenes, but exclusive to the Blu-ray are a few additional extras. There is an exclusive expanded director’s video commentary, as well as a six-part documentary about the making of the film. This documentary shows that it isn’t just the style of their films which are energetic and somewhat insane, but also the manner in which they are made. Neveldine and Taylor are as much stunt men as they are filmmakers.