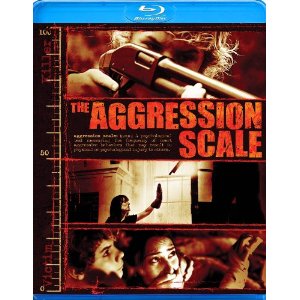 The Aggression Scale begins like so many other “home-invasion” horror films of recent past, from Funny Games to Trespass. There is a seemingly innocent family moving into their new home and a group of violent criminals who break in and hold them hostage in their own home. Extreme violence inevitably occurs. The one thing that sets The Aggression Scale apart is enough to make it uniquely disturbing, albeit effectively gripping viewing experience.
At the beginning of the film we are given information about the aggression scale, and how it determines a person’s propensity towards violence. When this information is followed by a series of brutal murders done by a group of thugs working for a mob boss out on bail (Ray Wise), it is easy to assume that they are the ones that are highly rated on the aggression scale. As they enter the Rutledge home, however, it becomes clear that they are not the ones that the title is referring to.
The Rutledge family consists of a bratty teenage daughter and a silent young son named Owen. Although he appears harmless, Owen is 99.5 on the aggression scale, making him the only chance of survival against the brutal attackers. With a disturbing knowledge of guerilla warfare and the ability to make weapons out of anything within reach, Owen is an unexpected deadly force. The result is somewhat like an R-rated Home Alone, brutal and relentless in suspense and violence. There are moments of bad acting and poor dialogue, but the film never slows down enough for these to be as dominant as the cat-and-mouse action.
The Blu-ray includes a making-of featurette, but I actually found the high definition presentation to be the highlight of the disc. There are some visually satisfying moments, and the soundtrack helps fuel the intense storyline even further.