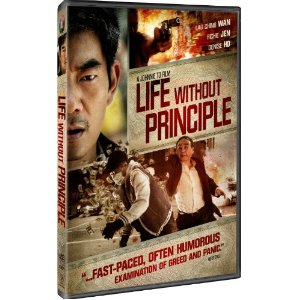 Life Without Purpose is like a Chinese Pulp Fiction within the financial world. Several seemingly unconnected characters struggle with moral decisions regarding money, while unique circumstances place them into incredible situations, all within the confinement of one eventful day in the stock market. The story is told somewhat out of order as well, allowing for the significance of certain events to sink in.
When the stock market begins to suddenly crash in , it affects everyone. Most directly it has a negative affect on the investment banker struggling to make ends meet at work when the market was doing fine, but the sudden panic also has an impact on the criminal underworld. A loan shark who regularly uses the bank for depositing his cash is the catalyst for several moral choices when a thief attempts to rob him in the parking lot and the investment banker is given the opportunity to keep some of his money unnoticed.
The strongest storyline in Life Without Principle, however, focuses on the one character who has little to no interest in monetary gain. What he cares most about is remaining loyal to his childhood friends. Willing to commit any crime or beg for any amount of money in order to remain loyal, there is a strange morality to his immorality. First he is desperately attempting to raise money to bail out one of his criminal friends in jail for gangster activities and assault, but he is just as quickly willing to help his friend making money in the stock market.
Though the cover of the DVD has a gun, an explosion and one of the film’s moments of violence, this is far from an action film. It is a suspenseful morality play with more humor than drama or action, all the while telling a compelling and convincing story of coincidental connections.