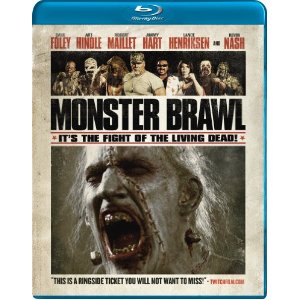 If you have ever wondered what would happen if you pit some of the most iconic monsters of films and folklore in a UFC-style battle, Monster Brawl is the movie for you. If you expect your films to have a storyline or characters developed beyond gags and bad make-up, Monster Brawl is not the film for you. Essentially containing nothing more than a series of fights, Monster Brawl is less of a movie as it is an undeveloped idea. Violent and vulgar as it may be, the focus is on comedy when dealing with the sporting event of Monster Brawl makes WWF appear realistic.
Dave Foley and Art Hindle host as a slew of monsters separated into categories face off against each other. The monsters are split into divisions of creatures and the undead, and paired off again in weight categories. The main fight is between the heavyweight winners in both the creature and undead categories. This is all remarkably insignificant, however. The entire endeavor simply seems to come from the mind of a bored 13-year-old boy, complete with a few bikini-clad girls ringside.
Even at 89 minutes, Monster Brawl seems too long for the storyline presented. The balance between comedy and horror is off, and neither is particularly successful. Watching Cyclops, Frankenstein’s Monster (inaccurately referred to simply as Frankenstein), and a Werewolf as they battle each other brutally is not nearly as entertaining as one might imagine. At least not in the hands of filmmaker Jesse Thomas Cook, who is responsible for writing, directing and editing this masterpiece in immaturity.
The Blu-ray includes an audio commentary with Thomas, as well as producers Matt Wiele and John Geddes. Also included in the bonus features are a behind-the-scenes featurette and an outtake reel. The high definition is not bad looking, though it only makes the shoddy special effects more apparent.