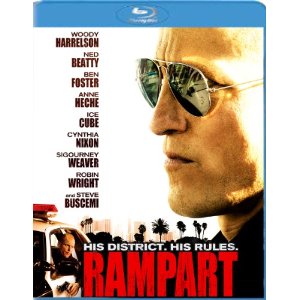 This is Woody Harrelson’s film. I don’t just say that because he is a strong performer who dominates the screen. I say that also because it is within a film we have all seen dozens of times before. There is little new within the screenplay by James Ellroy and Oren Moverman, and that is why it quickly becomes a character-based film in which Harrelson is able to show off his acting chops in some very indulgent sequences. This is not to say that Rampart is a bad film. In many ways it was mostly entertaining and well made, but it has been made better before. In some ways the entire film felt like a rehash of Bad Lieutenant. Either version.
Set in 1999 , Harrelson plays Officer Dave Brown. Brown is a cop that is accustomed to doing what he wants, when he wants. This is quickly clear both in his personal and professional life. He has two children by two different women, who also happen to be sisters. In his professional life, Brown is no better. He is used to doing the dirty work of his department, but things have changed after the beating of Rodney King. When Brown is caught on camera excessively beating a suspect, he is forced to manipulate the system by lying and cheating in order to survive.
The entire film is a character study of a man who has more bad qualities than good, which can be somewhat difficult to enjoy, regardless of the talent involved. Eventually Brown becomes involved with a lawyer (Robin Wright), having a sexual relationship that nearly seems to have the ability to save him. In the end it is clear that the machismo attitude prevents Brown from changing his way, and eventually he digs himself in even deeper than he can lie or manipulate a way out of. The cast is impressively stacked even beyond Harrelson’s performance, though there are too many names which are underused within the film. These names include Ned Beatty, Ben Foster, Anne Heche, Ice Cube, Cynthia Nixon, Sigourney Weaver and Steve Buscemi.
The Blu-ray includes a commentary track with director and co-writer Oren Moverman, cast and crew interviews and a behind the scenes featurette.