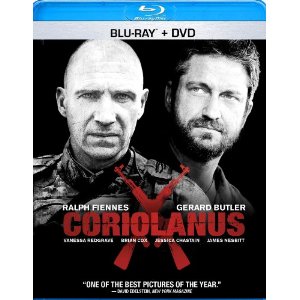 When William Shakespeare’s well-pillaged works are updated to modern times, as has been done with Romeo and Juliet, Hamlet and The Taming of the Shrew, it comes as no surprise. Those of us who have not seen the classic period adaptations are at least familiar with them, calling for a modern twist in film adaptations. Coriolanus, however, is a Shakespeare play which is little known and has never before been adapted to film. The choice to adapt it as a modern/futuristic tale of humanity and war is fitting for the story, however little audiences may already be familiar with it.
I find little reason to criticize Coriolanus simply because of the modern adaptation, though the use of Shakespeare’s words against a world of guns instead of swords is often more jarring than fitting. My biggest complaint about Coriolanus is the fact that it mostly appears to be a one man vanity project. Ralph Fiennes previously had experience onstage as the title character, which apparently was enough to motivate the actor to produce and direct this star-studded and mostly star-wasted exercise in overacting. What Fiennes may have been unable to realize from the front of the camera is how different stage acting is from film acting. Every note he gives is a high one, and although his intensity helps fuel the film at certain points, it also makes a remainder feel extremely monotone.
The story may be a lesser known of the bard’s, but that does not mean it is unfamiliar. There are key elements within the story which can be found in any number of more recognizable works of Shakespeare. Caius Martius ‘Coriolanus’ (Fiennes) is a Roman General who is feared by Roman enemies and despised by the Roman people. Although his mother (Vanessa Redgrave) pushes him to use politics in a way that will advance his place among the people, the General refuses to play the games of politics. He is a soldier and his only concern is keeping the enemy Tullus Aufidius (Gerard Butler) from entering . As a political move, Coriolanus is banished from once peace has been found. Seeking nothing more than revenge, the shunned soldier seeks out ’s enemy in order to help take down the tyrants of .
Despite much of the film being about war, there is actually very little action with the storyline of Coriolanus. It is a film much more focused on politics and deceit, much like the downfall of Caesar or the destruction of Othello. The words are strong, having been written by Shakespeare, but they are not always gracefully adapted to modern scenarios. There is a great deal good within Coriolanus, but I’m afraid it never elevates to great thanks to a distracted director spread too thin with too many roles. The Blu-ray includes a high definition presentation of the film along with an optional audio commentary with Fiennes.