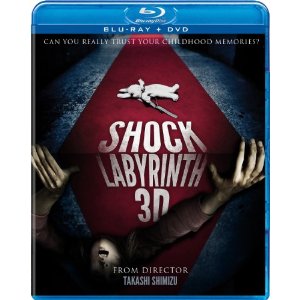 Shock Labyrinth 3D is somewhat like the house of horrors which the storyline takes place in; it a film which is full of cheap 3D thrills and a pathetically dull and dragged out storyline to match. Without the 3D it is even more unbearable to sit through. There is also a DVD version available in this package of three ways to view a below average film, but in standard definition only the story and characters remain in focus. I don’t recommend watching this film at all, but at the very least there is some spectacle in the 3D, whereas the remainder of the film feels incomplete.
The storyline makes even less sense the more we find out, but it begins with so little information that it has a bizarre logic that works. The quality of the filmmaking is actually quite poor looking when not shown in 3D, regardless of the definition. At the beginning of the movie a group of childhood friends are reunited by a long lost member of their group. As children they all entered a House of Horrors at an amusement park, though one of them did not walk out the same. Ten years later Yuki suddenly appears to rejoin the friends, luring them into a trap at the same House of Horrors from their childhood.
The film asks for more than just suspension of disbelief. It asks audience not to think about the movie at all, and this is not easy when there are so few sincerely entertaining moments to at least be distracting from the discrepancies. The halls of the House of Horrors are predictably haunted and filled with all sorts of mind-bending tricks and 3D effects.
The Combo pack includes the 3d Blu-ray and 2D Blu-ray, as well as a DVD. The special features include interviews and a behind-the-scenes featurette.