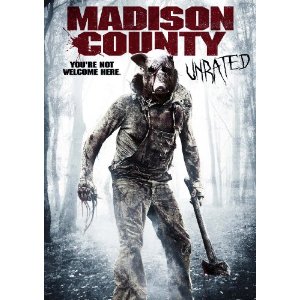 is hardly a feature film. With a concept that is hardly original and a running time of 82 minutes, this is a horror film that has few surprises and only predictable twists amidst the usual graphic gore. There doesn’t even seem to be enough time or effort for a unique villain. Instead we just get a masked killer who wears the face of a pig and slaughters innocents for unknown reasons.
The film begins like so many other slasher films before. If there weren’t generic horror films like this, it wouldn’t have been possible for the tongue-and-cheek creation of Cabin in the Woods. A group of co-eds decide to travel to a rural town which is brought to the attention of a few students who read a book about a local serial killer named Damien Ewell. After corresponding forebodingly with the author of this book, the young students are lured into the lair of the killer, hoping to discover the truth. Despite the fact that there is a book written about the hog-masked psychopath, it comes as no surprise to find that he still remains.
We expect that there are going to be some bloody murders done by the masked man, but is slower than Bridges of Madison County in getting there. At first the entire town folk insist that the author no longer lives in town and that the murders were all fabricated. It is a small town, so their presence is known immediately, but we must wait half of the short running time until the attacks begin. At first there is the cliché moment of discovery and several useless conversations about relationship dynamics within the group, all of which is made irrelevant with death.
Fans of bloody horror films may also find themselves disappointed by the lack of creative carnage within the film. There are some adequate moments with an axe, but none of this is remotely original or even the slightest bit daring. The special features of the DVD include an audio commentary track with writer/producer/director Eric England, producer Daniel F. Dunn and actor/producer Ace Marrero. There are a few other odds and ends, including a trailer, though nothing which improved my opinion of this highly forgettable horror film.