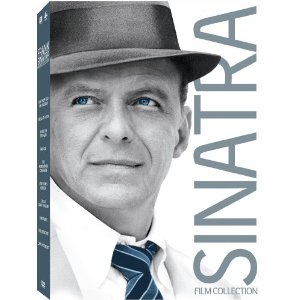 The two volumes which make up this Frank Sinatra Collection of MGM classics include mostly films from the celebrated crooner’s later cinematic career. Most notable is the John Frankenheimer political thriller, The Manchurian Candidate, followed by World War II Von Ryan’s Express. This collection is filled with films in which Sinatra is a cop or a soldier, and rarely ever singing. Only the rare film in this collection (such as Frank Capra’s A Hole in the Head) actually have Sinatra doing what he is best known for: singing.
Just because there are fewer musicals in this collection doesn’t mean that these are throw-away films. Nearly every one of them is worth watching, and some are forgotten classics. From 1957’s The Pride and the Passion to 1968’s Lady in Cement, the collection includes ten of Sinatra’s films in an 11-year period. Volume 1 includes two war films and the only two musicals in the collection. Starting with the strange historical epic, The Pride and the Passion, there is also a tradition of love triangles within this collection. Sinatra is a Spanish resistance fighter resisting against Napoleon’s French army with the help of a British soldier played by Cary Grant. Both men vie over the affections of Sophia Loren. In Kings Go Forth (1958), the love triangle continues between two World War II American soldiers (Sinatra and Tony Curtis), who each have their eye on an American girl raised in (played by Natalie Wood).
The two remaining films in Volume 1 are much lighter, beginning with Capra’s A Hole in the Head, which isn’t a full-blown musical but has the classic song “High Hopes” to remind us of Sinatra’s other abilities. Based on the Arnold Schulman Broadway play, the lighthearted comedy about a hotel owner and his street-smart son also includes a supporting performance by Edward G. Robinson. The final film in the first volume is the only true musical, and another Broadway production turned into a classic film. Taking place in turn-of-the-century , this film follows the forbidden dance of the Can-Can, and co-starring Shirley MacLaine as a dancer who must once again choose between Sinatra and another man.
The second volume of the Sinatra collection includes several more war films and a collection of movies in which Sinatra plays a convincingly seasoned detective. In The Manchurian Candidate he is a military commander who discovers that one of his men has been brainwashed during the war to become an assassin. In Von Ryan’s Express he is an American POW who leads his fellow prisoners in an escape from the Germans aboard one of their own trains. Cast a Giant Shadow is a monumental cinematic achievement, though one in which Sinatra only has a supporting role and Kirk Douglas stars as an American commander leading the Israeli military against the Arab forces. It also co-stars John Wayne.
Two of the final three films have Sinatra playing wise-cracking private detective, Tony Rome. This title character takes on the mystery of a missing diamond broach in the first film. The follow-up movie, Lady in Cement, begins with a dead nubile woman found beneath the sea, which results in a dangerous investigation. Lady in Cement co-stars Raquel Welch, though it is Sinatra’s wisecracks which make this film so enjoyable, even if only as a poor-man’s Phillip Marlowe. Also included is the darker crime drama, The Detective, which begins with a bizarre murder mystery and turns into a bold social commentary for the times. Not all ten of the films included in this tow-volume collection are perfect movies, but each and every one of them has admirable and interesting qualities. Most importantly, these are perfect films to showcase the abilities of “ol’ blue eyes” when he wasn’t singing.